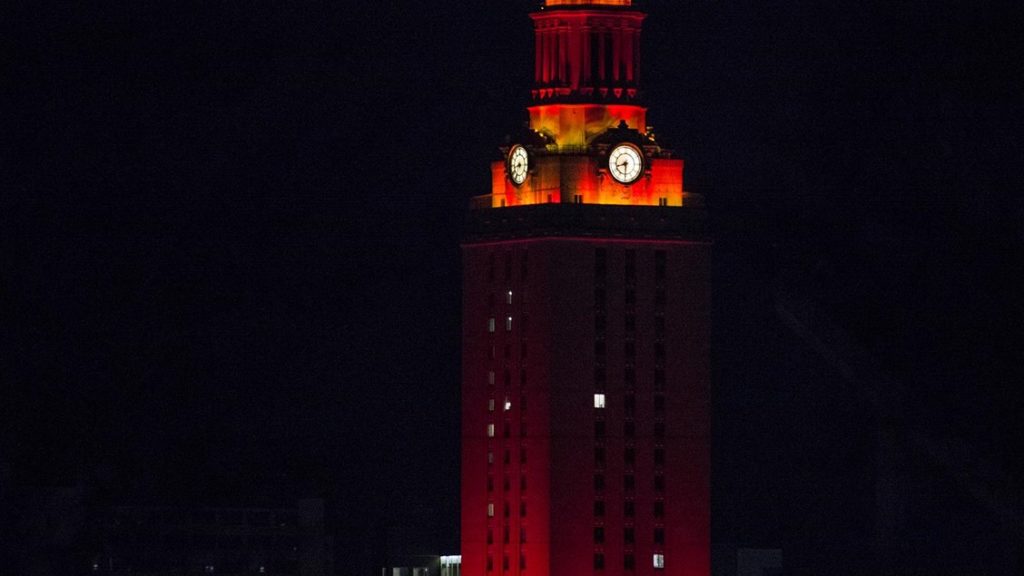 The UT Tower will shine with entirely burnt-orange lights Thursday, September 13 in honor of Bobby and Sherri Patton on the occasion of renaming the Liberal Arts Building as Patton Hall and in honor of the university’s birthday on September 15.

The Liberal Arts Building will officially become Patton Hall during a dedication ceremony the following day. In 2016, Fort Worth oil and gas investor Bobby Patton Jr. and his wife, Sherri, gave $20 million to the university to support faculty and graduate student endowments in the College of Liberal Arts. That gift also supports experiential learning opportunities for undergraduates as well as excellence funds to support priority programs in the college.

Bobby Patton, a Plan II student in the early 1980s, said the liberal arts have always been a passion for him, and his experiences in Plan II inspired him to make the gift. Plan II is a four-year interdisciplinary arts and science honors major in the College of Liberal Arts.

“I like to call this an investment rather than a gift,” Patton said at the time. “After I left UT I realized just how important liberal arts were to my life. They taught me how to learn and how to keep on learning.”

Born and raised in Fort Worth, Patton received a B.B.A. from The University of Texas as well as a J.D. from St. Mary’s University and LL.M. from Southern Methodist University. He serves on the board of Security Benefit Corporation and also serves as the tournament chairman of the Crowne Plaza Invitational PGA Tour event at Colonial Country Club in Fort Worth. Sherri Lynn Patton also earned a law degree from SMU and later served as an assistant district attorney in Dallas.

The Tower lighting also celebrates the university’s 135th birthday. On Sept. 15, 1883, The University of Texas at Austin opened with one building, eight professors, one proctor, and 221 students – and a mission to change the world.

In 1839, the Congress of the Republic of Texas ordered that a site be set aside to meet the state’s higher education needs. After a series of delays over the next several decades, the state legislature reinvigorated the project in 1876, calling for the establishment of a “university of the first class.” Austin was selected as the site for the new university in 1881, and construction began on the original Main Building in November 1882.