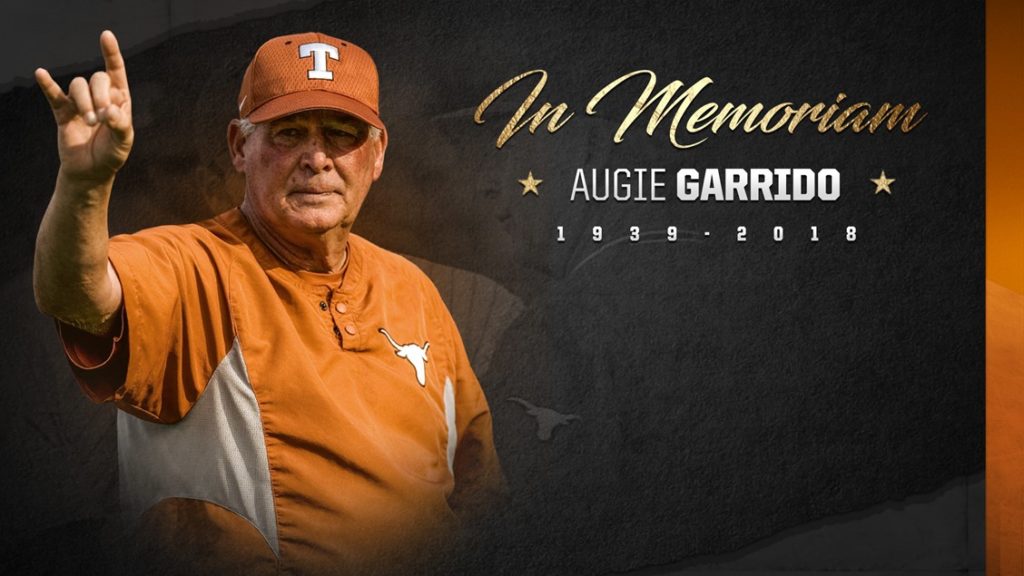 The winningest coach in college baseball history, Garrido passed away early Thursday morning at the age of 79. His storied 48-year baseball coaching career spanned six decades, including his final 20 seasons at Texas. He will be remembered as one of the most successful coaches in not only baseball, but college sports history. His achievements were many, but his legacy reaches far beyond the playing field.

The winningest coach in college baseball history, Augie Garrido was first and foremost an educator. He coached young men to do more than play baseball, and his impact lasted long after their playing days. He is deeply missed, and we’re honoring his life with a dark Tower tonight https://t.co/0wotZanvFd

“This is a very, very sad day,” said University of Texas Vice President and Athletics Director Chris Del Conte. “We lost one of the greatest coaches of all time, a truly special Longhorn Legend and college athletics icon. There will never be another Augie Garrido. He was a once-in-a-lifetime personality whose impact on Texas Athletics, collegiate baseball and the student-athletes he coached extended far beyond the playing field. If you were fortunate enough to have spent time with Augie, or if you followed him in any way, he had a great effect on you with his brilliant combination of wisdom, wit and charm. He was just an incredible coach, molder of men and a great person. He will be missed, but the memories of him and his awesome accomplishments will carry on forever. Our thoughts and prayers go out to his wife, Jeannie, and his family.”

Garrido finished his career in 2016 as college baseball’s all-time wins leader (1,975 wins). He is the first baseball coach to lead two different schools to national titles (Cal State Fullerton and Texas) and is one of only four coaches in the modern era of NCAA baseball, football and men’s or women’s basketball to do so (Nick Saban, Rick Pitino and Urban Meyer). Garrido guided squads to National Championships in four different decades, and is one of only three coaches in history to win five or more NCAA titles (1979, 1984, 1995, 2002, 2005).

“Augie was a giant in our game,” Texas head coach David Pierce said. “His impact on baseball, on the Forty Acres, and on me and so many others will live on forever. My thoughts are with Jeannie, his friends, his family, and all those who were lucky enough to have met him, played for him, or learned from him. His presence will be sorely missed but his legacy will never be forgotten.”

“When we were looking for a baseball coach, we already knew that Augie was the guy we needed, and he did not disappoint,” former Texas Men’s Athletics Director DeLoss Dodds said. “We had watched him in the College World Series and we knew what he meant to college baseball and the special person he was. He was absolutely the right guy at the right time. He and his kids set the standard that caught fire within the athletics department when they won the National Championship in 2002, showing all of our sports what could be done at the highest level. Men’s basketball went to the Final Four in 2003, and football capped it with the National Championship in 2005. He and Jeannie have been part of our family for more than 20 years. Augie was a great coach, but most of all, he was a dear friend. We lost a great man today. He will be truly missed and our thoughts and prayers are with Jeannie, his family and his many friends.”

The Vallejo, Calif. native brought his own unique style to the game of college baseball and Longhorns athletics. He was known for the mental and physical development of his student-athletes and teams. His many honors, records, championships and victories are well documented, but the psychology with which he fostered that success may be what best defined him.

A 1961 graduate of Fresno State, Garrido played three seasons for the Bulldogs and earned all-conference recognition, while also taking part in the 1959 College World Series. Along with his UT predecessor Cliff Gustafson, he is one of only 11 men ever to both play and coach in the CWS. Upon graduating, Garrido signed a professional contract with the Cleveland Indians and played six years in their minor league system before retiring in 1966 to accept a coaching position at Sierra High School in Tollhouse, Calif.

Three years later, Garrido’s collegiate coaching career would begin as he accepted the head job at San Francisco State in 1969. He then spent his next three seasons at Cal Poly in San Luis Obispo (1970-72) before taking the reigns of the Cal State Fullerton program in 1973 where he embarked on the first of many highly-successful campaigns with the Titans. In two stints totaling 21 years as head coach there, Garrido produced a remarkable record of 929-391-6 (.703), while netting seven CWS appearances, one runner-up finish and three national crowns. In between his times at CSFU, Garrido led Illinois to a pair of Big 10 titles, including the school’s first in 26 seasons, and a pair of NCAA Tournament appearances.

Garrido’s name is held in high regard when people speak of his accomplishments in the College World Series. He is tied for second with five National Championships (trailing only Rod Dedeaux’s 10 at USC) and 15 appearances (trailing Cliff Gustafson with 17), and ranks third in victories (41) and series games played (63) among all-time coaches. He is also one of only eight men in history to coach two or more different teams in the CWS and only the third Longhorns head coach (Bibb Falk & Cliff Gustafson) in the 122 completed years of Texas Baseball to lead the Horns to Omaha. He was one of three coaches named to the College World Series Legends Team in 2010.

Along with his collegiate baseball coaching career, Garrido, who was selected for induction into both the Texas Sports and Titan Athletics halls of fame in 2005, also served as an assistant coach on Team USA in 1990, took his 1979 National Champion Fullerton team to Taiwan on a Goodwill Tour and managed in the Alaska Summer League. In the fall of 2008, Garrido was inducted into the Longhorn Hall of Honor, and in the summer of 2013 he was inducted into the Omaha College Baseball Hall of Fame. In January 2016, he was enshrined in the American Baseball Coaches Association Hall of Fame. In May of that year, Garrido received an Ellis Island Medal of Honor from the National Ethnic Coalition of Organizations for his lifelong commitment to hard work and sacrifice. He was inducted into the National College Baseball Hall of Fame that July.