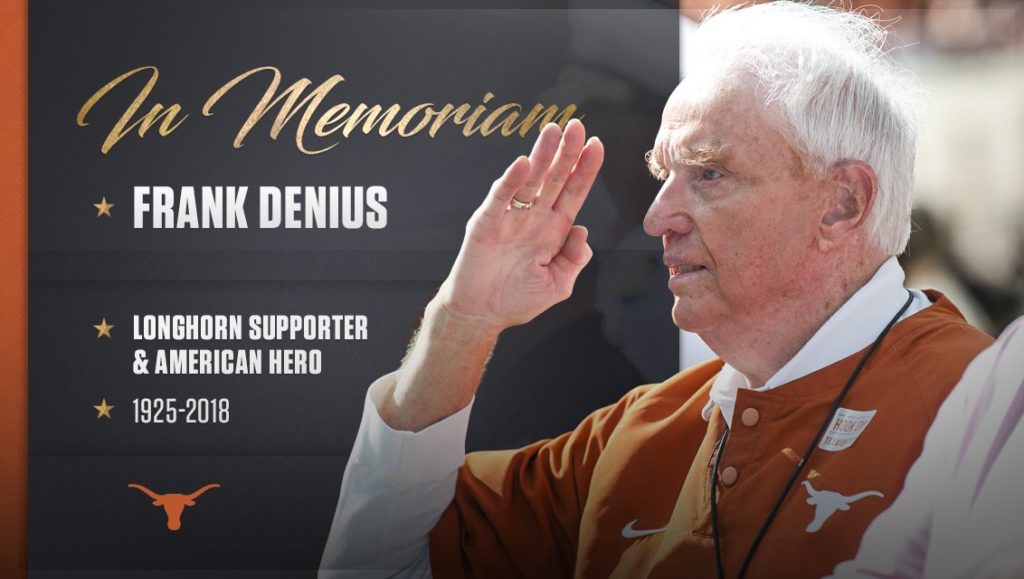 The UT Tower will darken the night of Tuesday, July 31 to honor Frank Denius, one of the university’s most loyal alums.

“He was the ultimate Longhorn,” President Gregory L. Fenves said of Denius, who died Sunday at the age of 93. “He came to The University of Texas in 1945 after returning from World War II as a highly decorated hero and never stopped giving his time, passion and resources to his alma mater. His generosity improved the lives of thousands of students and allowed UT to grow into one of the great public flagship universities in the nation. He was a friend and adviser to me and to many previous presidents. I will miss him greatly, but I know his legacy will last for generations here on the Forty Acres.”

Denius received four Silver Stars and two Purple Hearts for his service and leadership in the European Theater and as a member of the invasion of Normandy on D-Day. The Athens, Texas, native returned home after the war, enrolling in UT Austin in October 1945 at the age of 20.

He earned two degrees in business and law. Denius soon developed a reputation as one of Texas’ premier lawyers and civic leaders.

Denius also developed a reputation as a devoted football fan. The team’s practice fields are named after him in honor of his support of Texas Athletics. As former coach Mack Brown liked to say, “Frank has been to more practices than I have.” Denius never missed a football practice or game.

His spirit and generosity are legendary. Both individually and through his family’s Cain Foundation, Denius was the driving force behind many types of philanthropic support to his alma mater including the Moody College of Communication, School of Law, College of Liberal Arts, College of Fine Arts and the Harry Ransom Center.

He was an early advocate for a medical school in Austin, beginning in the mid-1950s. Without his steady and ceaseless efforts, the university’s Dell Medical School would not be a reality today.

“God’s gift to us is our potential. What we do with our potential is our gift to Him,” said Athletics Director Chris Del Conte in a tweet Sunday afternoon. “Frank Denius will be missed but never forgotten. As he lived life to the fullest, not an ounce of potential was left unspent.”

The darkened Tower configuration is reserved for significant solemn occasions, including UT Remembers.