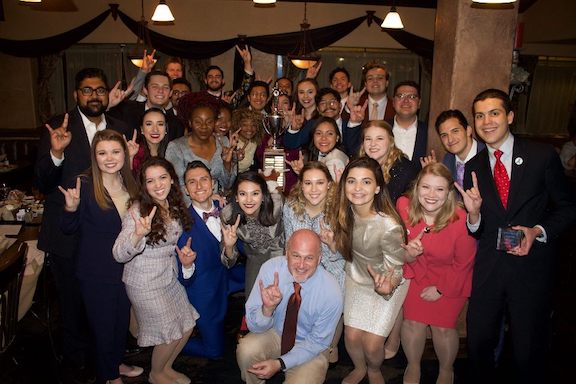 The UT Tower will glow burnt orange Saturday, May 5th in honor of the Texas Speech Team winning their third national championship in a row.

The team emerged from a field of 67 qualifying colleges and universities after a hard-fought contest that went down to final rounds before the outcome was decided, placing first overall with 511 points. Perennial powers Western Kentucky University (495.5 points) and Bradley University (361 points) finished No. 2 and No. 3, respectively, with George Mason University (345 points) and the University of Alabama (253 points) rounding out the top five.

UT Austin students were also national runners-up four times, with Dani Soibelman at No. 2 in impromptu speaking, Abigail Onwunali at No. 2 in both dramatic interpretation and poetry interpretation, and Suchinder Kalyan at No. 2 in informative speaking. Additional national finalists included Cimmi Alvarez at No. 3 in persuasive speaking, Arel Rende at No. 3 in extemporaneous speaking and No. 6 in communication analysis, Jordan Auzenne at No. 4 in communication analysis, and Blake Bergeron at No. 3 in after dinner speaking.

“We have so many alumni and volunteer coaches who have provided support for these students throughout the year,” said Cox.“It is such a combined effort. The hardest part is figuring out when to just get out of the way and let the students finish what they started.”

Five students placed in the top 12 overall speakers in the country, based on their combined performance across multiple individual events. Abigail Onwunali was No. 2 overall, Suchinder Kalyan placed No. 4, Arel Rende placed No. 5, Seis Steves placed No. 10, and Marianna Garcia placed No. 12.

Established in 1988, Texas Speech also won national titles in 1994, 1995, 2001, 2002, 2016 and 2017 and has finished in the top six programs nationally every year since 1989. This year’s team consists of 34 students from disciplines across UT Austin with a large representation of members from Moody College. Tournaments traditionally begin in mid-September and end in early March culminating in the national contest in early April.

Team director and Department of Communication Studies Senior Lecturer Martin “Randy” Cox (B.A. ’91, M.A. ’94) gave credit to the students and the many coaches who have worked with the program throughout the year.

Typical topics addressed at tournaments include issues of politics, identity, culture, social understanding, current events, presidential politics, and international affairs. Cox said the majority of his students go on to graduate, law or medical school and often become academics or use their skills in the nonprofit sector.

“This was an extraordinarily difficult contest,” said Cox. “The schools with whom we are competing are incredibly gifted and very well directed. I am extremely proud of the way our students have represented The University of Texas and the Moody College of Communication.”

In addition to the Longhorns winning back-to-back-to-back national championships, later this month Texas Speech will compete at the University of Wisconsin-Osh Kosh at the nationwide tournament of the National Forensics Association from April 19 to 23.